Largely due to media hype, a common misconception exists that the purpose of riot gear is to support aggressive interventions by law enforcement. Nothing could be further from the truth. In fact, front lines officers require defensive gear to protect the public and safely do their jobs.

Police must maintain some level of defensive body protections all times due to unexpected dangers. It’s also no secret that civil unrest can spike at any moment. That’s why it’s important that military and law enforcement officials always have reliable police equipment and riot gear on hand.

Duluth, Minnesota, is the perfect modern story as to why the use of riot gear is crucial for a city’s response policy, although there was controversy behind it for quite some time beforehand.

A substantial portion of discussions reportedly centered on how the new police equipment played into public protection. The community and other official agencies agreed that riot gear equipment was regarded as an essential protection for law enforcement and the public at large.

With this discussion and a community-wide understanding of how riot gear supports safety, the Duluth PD was ready to move forward with a “level four” response, which includes “credible threat of civil disturbance involving potential violence to persons or property.” In order to do so, they determined that the following items were needed for maximum security of the people, and the officers:

“Each time, we end up with a better product, and the protective gear policy is no different,” Duluth Police Chief Mike Tusken reportedly said. “I want to show my gratitude for the organizations and citizens who put many hours of their personal time in helping us create a policy that helps us be a better police department for our community.”

As demonstrated by the Duluth PD and community policies, officers require specific bodily harm protections to effectively do their jobs. For years, law enforcement agencies have had to rely on outdated riot suits and gear that were not designed with their safety or comfort in mind to help them during chaotic and unruly situations. Fortunately, Haven Gear saw the need to meet modern-day protection requirements, as well as public safety needs, with innovative police equipment and riot gear suits and accessories. These suits exceed the criteria outlined by older policies by enhancing the design elements to include:

Comprehensive bodily harm deterrents and the ability to deftly maneuver rank among the top reasons that next-generation riot suits support community policing and protection. An increased number of departments and law enforcement agencies are quickly discovering that riot gear purchases that can be fully outfitted when emergencies occur keep everyone safer.

Riot Gear At All Times 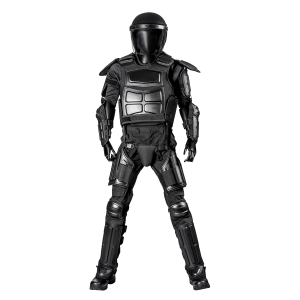 While many have stated that riot suits and riot gear are only suitable for unexpected and hostile situations, the experts at Haven Gear know that these moments can happen at any time. This is especially true for correctional officers, as angry inmates can strike unexpectedly. Not only does protection help the officers who protect us, but it also helps keep protestors and agile rioters at bay and minimizes their chance of getting hurt when a protest or riot breaks out in public. Next-gen riot gear also allows officers to keep their cool when temperatures surpass normal, helping them stay hydrated, focused, and safe when they need to be.

We saw the need for better protection, for those fighting for our protection. At Haven Gear, we take pride in being able to care for law enforcement and correctional facilities by providing them with state-of-the-art riot suits and gear designed with their safety in mind. No matter how large or small your department is, take the steps necessary to keep your officers safe. Contact us or fill out a form today to find out how we can help defend you in any situation.